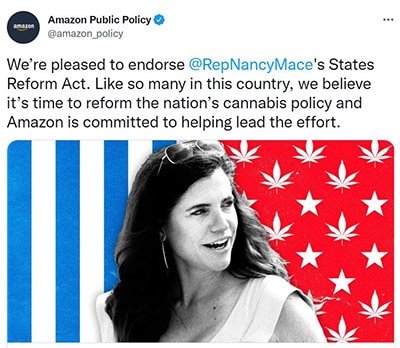 Amazon might not be in the cannabis business, but that’s not stopping the company from using its clout to advocate for federal reform.

“Most recently, we endorsed the States Reform Act, a Republican-led bill offering comprehensive reform that speaks to the emergence of a bipartisan consensus that it is time to end the federal prohibition of cannabis,” wrote Beth Galetti, senior vice president of human resources at Amazon.

The endorsement backs up Amazon’s advocacy of equitable workplaces. In June 2021, the company announced it would exclude cannabis from its comprehensive pre-employment drug screening program for positions not regulated by the Department of Transportation or other government entities.

At that time, Amazon also reinstated the employment eligibility for former employees and applicants who were previously terminated or deferred during random or pre-employment cannabis screenings.

“First, we recognized that an increasing number of states are moving to some level of cannabis legalization—making it difficult to implement an equitable, consistent, and national pre-employment marijuana testing program,” she said. “Second, publicly available national data indicates that pre-employment marijuana testing disproportionately impacts people of color and acts as a barrier to employment.

“And third, Amazon’s pace of growth means that we are always looking to hire great new team members, and we’ve found that eliminating pre-employment testing for cannabis allows us to expand our applicant pool.”

Amazon’s endorsement of Mace’s SRA follows the company’s support of other reform efforts from Washington, including the Marijuana Opportunity Reinvestment and Expungement (MORE) Act of 2021, and the Cannabis Administration and Opportunity Act (CAOA).

Democratic Sens. Chuck Schumer, N.Y.; Ron Wyden, Ore.; and Cory Booker, N.J., unveiled a preliminary draft of CAOA in July 2021, seeking comment from industry stakeholders by Sept. 1, 2021, but that trio has yet to formally file the legislation.

During the public comment period, Brian Huseman, Amazon’s vice president of public policy, offered the company’s support and feedback in a letter to the senators.

“Historically, criminal marijuana provisions have been unequally enforced upon people of color, perpetuating a vicious cycle of over-incarceration, poverty, health conditions, and other barriers to employment and economic opportunity,” Huseman said. “Likewise, pre-employment marijuana testing has disproportionately affected communities of color by stalling job placement and, by extension, economic growth. We believe this inequitable treatment is unacceptable.”

Despite receiving an abundance of feedback on CAOA, Majority Leader Schumer and company took on heat from industry players for their refusal to take up incremental reform efforts, like SAFE Banking, which aims to provide safe harbor for financial institutions servicing state-legal cannabis businesses, if they’re not part of a larger reform effort.

More specifically, Booker said, “I will lay myself down to do everything I can to stop an easy banking bill that’s going to allow all these corporations to make a lot more money off of this, as opposed to focusing on the restorative justice aspect.”

But many industry players who own small businesses don’t see it that way.

Industry stakeholders expressed notable reservations about the CAOA’s proposed 25% federal cannabis sales tax on any products produced in or imported into the U.S. by the fifth year of removing cannabis as a controlled substance, as well as the proposed legislation’s call for the Food and Drug Administration (FDA) to serve as the cannabis industry’s primary regulatory arm.

Alternatively, Mace’s SRA proposes a 3% federal cannabis excise tax and moves to put the Alcohol and Tobacco Tax and Trade Bureau (TTB), which operates under that U.S. Department of the Treasury, in charge of federal regulation for cannabis products in interstate commerce—all while allowing state governments the power to regulate products in their state-legal markets through the health-and-safety oversights of their choosing.

Since its introduction, SRA has garnered bipartisan support from various interest groups, including veterans, law enforcement, farmers and businesses, as well as political advocacy groups with deep pockets, like Americans for Prosperity, which flexes behind the funding of David and Charles Koch.

“We are enthused by the notable momentum in the country toward recognizing that today’s status quo is unfair and untenable,” Galetti said. “We look forward to working with Congress and other supporters to secure necessary reform of the nation’s cannabis laws.” ]]>
previous post