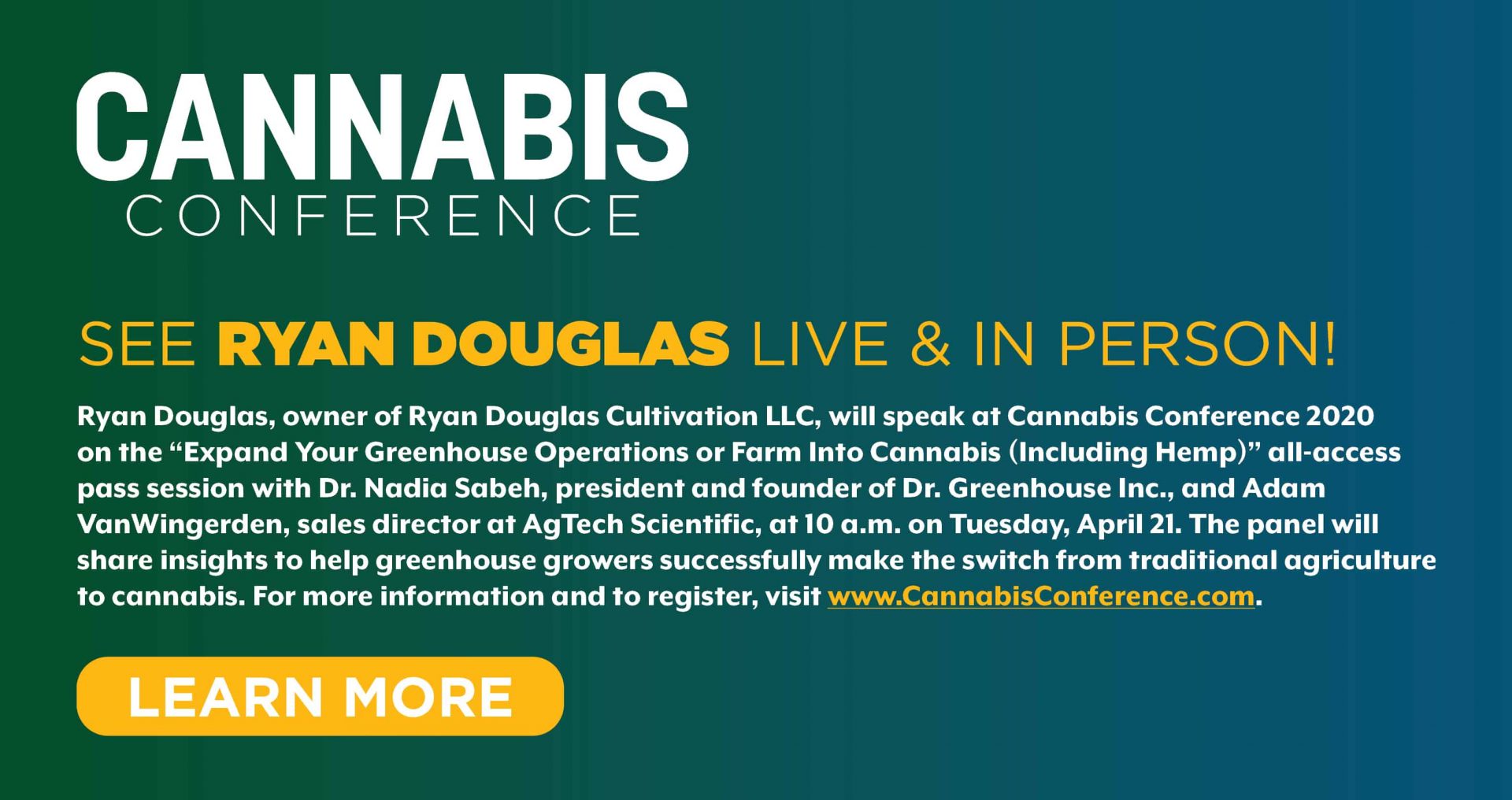 As cannabis continues soaking up the spotlight in the world of agriculture, more growers are looking to add the crop to their operations. But between fierce industry competition and growing requirements that differ from traditional crops, the switch isn’t right for everybody.

Ryan Douglas, the owner of Ryan Douglas Cultivation LLC, a company that provides cannabis cultivation services, had more than 15 years of experience as a commercial greenhouse grower of ornamental and edible crops before switching to the cannabis industry when he started his company in 2016. Here, Douglas shares advice on how growers can integrate cannabis or hemp into their greenhouse operations or farm—and whether the move is worth it.

Cannabis Business Times: What are the first steps a person should take when considering converting their existing growing facility to include cannabis?

Generally speaking, we need to make sure a retrofit or a conversion would make business sense. Even though there’s a lot of interest and a lot of hype in the news regarding medical marijuana cannabis production, I would recommend someone really look at the numbers to make sure that whatever the end product is can generate enough revenue to justify the cost of licensing and retrofitting in starting up. We’ve all heard through the news about certain states that actually have a glut in oversupply, where you’ve got a lot of people growing, for example, high-CBD cannabis. And so if you’re in a state where it’s in the news that people can’t sell their material and the prices are kind of falling off a cliff, that might not be a situation where the revenue you could generate would justify the retrofit.

CBT: What key features make someone an optimal candidate for converting an existing growing facility to include cannabis?

A couple things. If you’re going to retrofit a greenhouse, my recommendation is to make sure you’re growing in containers. The other option is to grow in dirt beds inside of the greenhouse. That’s a little bit old-fashioned, but it still exists. But the problem is there’s such a risk of contamination from residual chemicals in the soil from the previous crops that, because cannabis is an accumulator plant, the risk is it’s going to take up whatever’s in the soil.

A second important feature is the use of blackout curtains. Most cannabis varieties flower when they have 12 hours of uninterrupted darkness at night. It would be ideal to look for greenhouses that already have pre-installed blackout curtains because it’s actually pretty tricky to install these after the fact. If you picture any large commercial glass greenhouse, there’s a lot of stuff in the roof and the ceiling—a lot of equipment, lights, rafters or other support structures, electrical lines, sometimes even irrigation lines. And so it can be tricky to patch together this massive blackout curtain to cover a lot of space of the cultivation area because we have so much stuff up there.

A third point, which is the opposite of that, is a facility that has grow lights already installed, or at least has the electrical supply available to run grow lights to get installed. Our job as cannabis growers is to create the optimum growing environment for the plant, and sometimes that involves turning on a bunch of grow lights, or the opposite: creating artificial nights.

In my experience, one of the most efficient ways to convert a greenhouse [for cannabis] is to buy a greenhouse that has been used to grow specifically poinsettias or chrysanthemums. The reason is that these two crops are grown commercially and they’re very similar to cannabis in terms of their behavior, their structure and their requirements. Cannabis is photoperiodic, and that’s the same thing with poinsettias and chrysanthemums—poinsettias begin to turn red when they experience uninterrupted long nights, and chrysanthemums begin to flower when they receive 12 hours of uninterrupted night. Even the employees, it’s easier to train them because the production cycle is so identical to cannabis.

CBT: What are some key differences to consider when growing drug cannabis vs. hemp vs. more traditional crops, like corn and soy?

If we’re talking about the differences between high-THC or high-CBD marijuana, my opinion as a grower is there isn’t much difference. The only difference is if we are growing what I call industrial hemp, because these plants are really tall. They’re typically planted at a very high plant density, and they’re not growing for the flowers, they’re growing for the fiber of the stalk or the seed. And so that kind of crop gets really tall, and it’s not appropriate to grow inside of a greenhouse, so that crop much more resemble something like corn, where we plant it at a high density, we plant a ton of acreages outdoors and the quality of the flower doesn’t matter because that’s not the end goal.

Probably the biggest difference between growing cannabis and more traditional crops is going to be limitations with regard to pest and disease control. With most crops, there are a lot of options in terms of what products farmers can use to prevent insect damage and disease, because with a lot of fruits and vegetables, they can be washed prior to being consumed, so it minimizes the risk of consuming residual pesticides. With cannabis, because the active ingredient is inside the flower, we can’t wash the flower prior to processing or consuming it. So, for cannabis growers, during the last four, five, six weeks of the crop, we really can’t be applying any kind of pest control product to that plant because the flowers are going to absorb it and hang onto it. It’s going to show up in the finished product.

What we have to do is rely much more on things like preventative beneficial insect programs. We establish populations of insects that will attack and eat plant-damaging insects should they arrive. And since our hands are held in terms of fungicide applications, what cannabis growers will be doing more and more is relying on natural-based microorganisms that we apply on a preventative basis, and they compete with fungus for surface space on the plant. It’s trickier and it’s more expensive, but for cannabis growers, especially medicinal cannabis growers, we don’t have any other options. 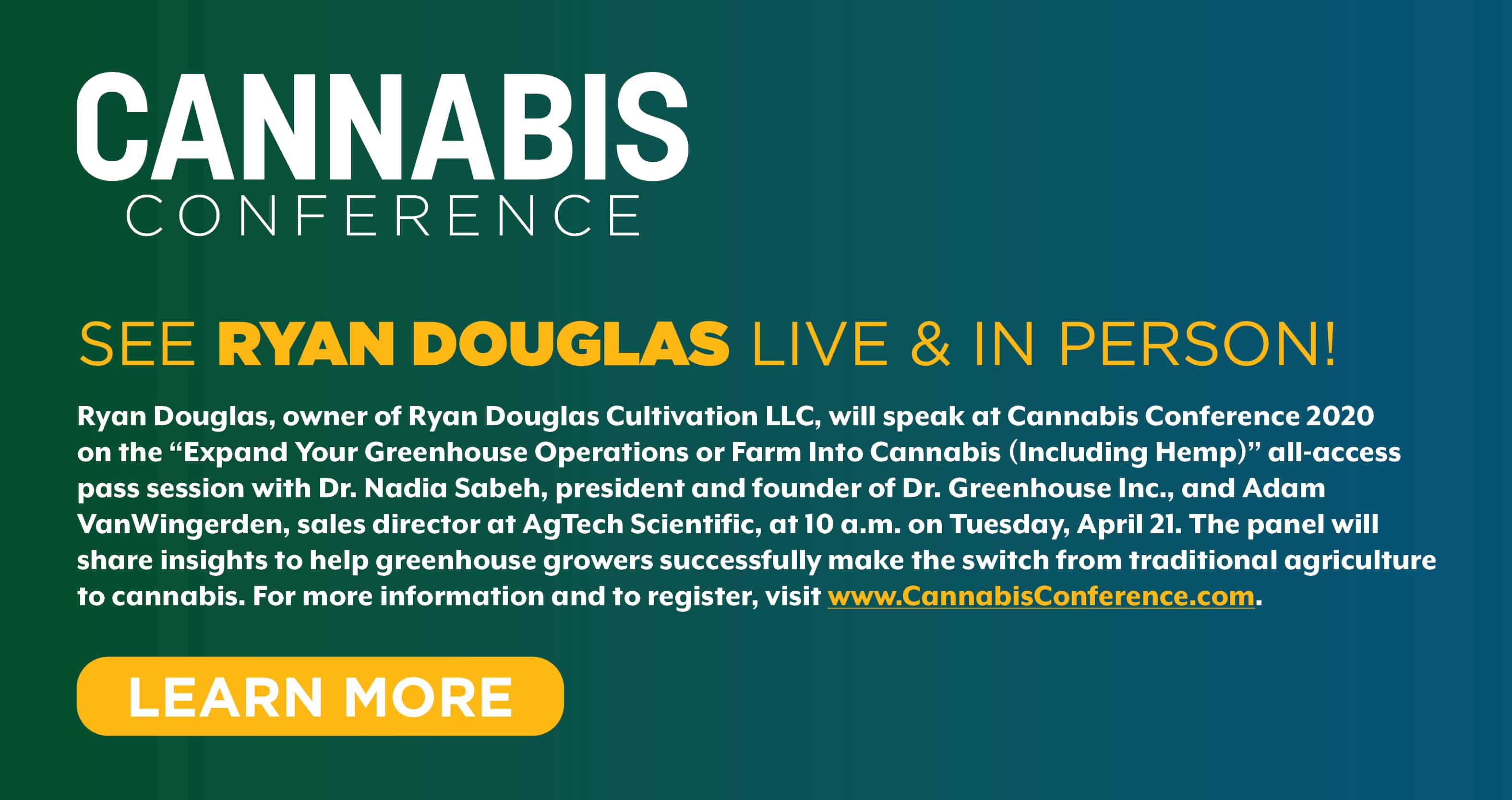 CBT: What are the benefits and challenges of adding cannabis to an existing growing facility?

Probably the biggest benefit is financial. Every year, commercial greenhouses are looking for new products to add so they can stay competitive. It might mean instead of growing so many red poinsettias, they start to grow pink and white poinsettias because it’s different and something new they can offer their customers. But growing a completely different crop, like hemp, really opens up opportunities. If that growing environment is conducive to hemp, and the retrofit, if any, is less than the potential revenue you anticipate generating, and you’re in a state where there’s not a lot of competition, then all of that makes sense.

CBT: What do you hope attendees will bring back to their business from your session at Cannabis Conference 2020?

I hope that attendees will leave our panel discussion with some practical steps for evaluating whether or not a leap into the cannabis industry makes sense. It’s not right for everyone!

Editor’s Note: This interview has been edited for style, length and clarity.